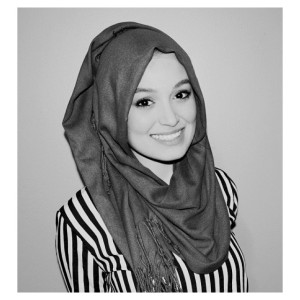 My name is Zehra Tajouri and I’m a Libyan-Canadian communications studies student. I think my dream is to eventually work in the media – I’m not sure what side of the media, but something more backstage. I want to be the person who’s able to make choices, who can say “let’s try this.” I don’t want to be on screen though – I just want to help other Muslim women get on screen.

I run several blogs and I occasionally make YouTube videos. My favorite thing in the world is people. I think that’s because of all the travelling I did as a kid –  I was born in Libya, raised in Canada, did highschool in both Malaysia and China and then moved back to Canada to do my university degree, and I still feel like I haven’t seen anything.

I typically write this on everything I’m working on, and it’s not because I genuinely believe I will one day move mountains, but I think it’s just what the poem reminds me of – that there will be tough times, and times when you’ll want to quit, and times when it’s not going to work out but if you push through – you can do it. You can succeed. You can move mountains.

I like it because of lived experiences, because sometimes I want something so bad and I don’t get it and I get so angry and sad and then a year later when my life is going great – I look back and think, “Thank God, I was led to a different path because I didn’t get this opportunity.”

What Hadith do you wish more non-Muslims knew about? Why?
The hadith I wish most non-Muslims knew about is more like a collection of hadiths but it is “the ten rules of war in Islam,” because I remember learning about them and being shocked at how peaceful they handled wars, and wondering how they ever won anything at all.

1. What is your favorite book?
My favorite book is 1984 by George Orwell, just because it taught me a lot about perception, and how reality is just an idea that’s agreed upon by the majority of people, for example: if a huge ball dropped in the middle of a pool and everyone who saw it said, “no, there was no huge ball. Nothing dropped.” then everyone else in the world will go on believing that the ball didn’t drop. It becomes the reality.

2. Who inspires/inspired you?
It depends in what sense, but Islamically – I went to a lecture by Suhaib Webb called, “I want to repent, but…” and it was just a talk about forgiveness, and how forgiveness in Islam is infinite if you truly want to be forgiven and how easy it is to wipe the slate clean and change your life – so that was a life changing lecture for me when I first heard it.

4. What advice would you give your 13 year old self?
Make school more of a priority than people because attention/validation from people will make you feel good for like 5 seconds but it becomes an ugly addiction.

5. What are your hopes for your daughter(s)?
That they have good, kind hearts.

6. What is the biggest trial you went through in your life and how has that changed you?
There isn’t a big trial, but there have been many little trials where I would stay in my room for weeks at a time because I get really sad. It never changes, I think there will still be weeks in the future when I’m 40 years old and I will have weeks like this. It’s fine, because when I get out of them…I realize life is good.

7. Any regrets? What’s something that you wish you’d thought about more before you did it?
I wish I was a better kid. My parents gave me the world, and it was only in my late teens that I realized this. I used to put everything else before them because I always knew they’d be there for me – like they were superheroes or something, and they were. Except after I turned 18, I realized my parents were also human beings with feelings and even their children hurt their feelings so I stopped looking at them as superheroes unaffected by words and started looking at them like people.

8. How do you stay grounded in your work and/or spiritually grounded?
I remember that there is always something out there I can improve on. That’s what keeps me grounded – realistic goals, and once I achieve them I usually push on to a bigger goal.

9. How do you bring about real change?
There’s a lot of stuff I want to do, but for right now – I keep a personal blog where a lot of younger girls follow me, I think that’s a good way I bring change. They vary – Muslim girls and non-Muslim girls follow it and ask me for advice about everything and I typically try to answer their questions and I get messages back thanking me for my advice and saying they’d never thought about issues that way. It feels good. It’s such a small thing, but it feels good when someone tells you, you’ve positivily impacted their life.

10. What do you hope to be remembered for?
I hope people just remember me as being a good person who made their life better when I was around. Eventually, I’ll die and maybe I’ll leave behind a small legacy on Google or whatever, but strangers don’t care that much about you. It’s people you see every day who pray for you, who attend your funeral, who ask God to forgive you. I want them to remember me as someone who positively impacted their life.

Note: We’re celebrating Muslim youth this month! Tune in on Twitter to join the #MYRising conversations and check out Love, Inshallah, Coming of Faith and Muslim ARC for more #MYRising features.