Spiritually, I am still very much Muslim and I invite others to establish their own definitions as well. The more complicated it gets, the more we break the monolith. 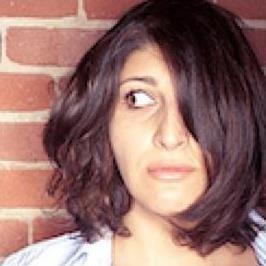 I am a Muslim Feminist Iranian-American comedian. I love introducing myself that way on stage. Everyone in the audience looks at me confused: “A Muslim? And a Feminist? Where’s Iran?”

Some comics avoid talking about their identity, but I can’t imagine not discussing it. Being raised Muslim has shaped my entire sense of humor, my outlook, my upbringing, and the values I uphold. Besides, where there’s tension, there’s always the potential for laughs!

There’s lots of Muslims out there—and of course all of us think we’re the “real” version. I’m the pork eating, alcohol drinking, pre-marital sex-having kind of Muslim. I don’t consider myself secular or “culturally” Muslim. I used to, but then I realized that I was comparing myself against those who simply observe differently than I do. Spiritually, I am still very much Muslim and I invite others to establish their own definitions as well. The more complicated it gets, the more we break the monolith.

Give us your favorite quote:

“I don’t know enough to be incompetent.” – Woody Allen

1. What is your favorite book?
“The Curious Incident of the Dog in the Nighttime”

2. Who inspires/inspired you?
W. Kamau Bell. Watching his rise to TV stardom has been surreal and awesome. I love that he’s able to be angry, poignant, accusatory, funny and entertaining all at the same time.

3. What is the best lesson your mother/mother figure taught you?
You know you are amongst family when love is enough.

4. What advice would you give your 13 year old self?
You have nothing to prove, only more to experience.

5. What are your hopes for your daughter(s)/son(s)?
Get a job with healthcare, fringe benefits and a 401K; or live in a country that cares about its people.

6. What is the biggest trial you went through in your life and how has that changed you?
My little brother got cancer when I was 19. It spread rapidly, directly as a result of racism and malpractice. His doctor refused to give the okay for further tests, because “in [our] culture we treat [our] sons like princes” and to him we were simply fretting over growing pains.

We had a lawyer until 9/11 happened. Our lawyer dropped the case and no lawyer after that would take it. Finally, one lawyer explained that no judge or jury would side with “us” against an “American” doctor.

That event changed me forever and in too many ways to include here, suffice it to say, I don’t give a whole lot of credit to the “assumed authority” and I have a cause that runs deep that I just can’t shake.

7. Any regrets? What’s something that you wish you’d thought about more before you did it?
I wish I did theater and performance right out of high school. I didn’t because I was intimidated by all of its uncertainty. Now, at 33, I know that when I love what I’m doing, I’m successful at it.

8. How do you stay grounded in your work and/or spiritually grounded?
I remember that I’m never going to die and that I have all the time in the world for perfection. (Sarcasm font)

9. How do you bring about real change?
By starting with myself, then never shutting up about it.

10. What do you hope to be remembered for?
My fierceness and my twitter feed. Also, can we quit making smart phones and invent immortality already?? This question creeps me out.