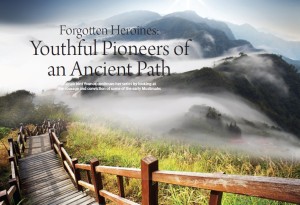 When we think of pioneers, we usually imagine adults – strong, powerful people, usually men, who used their intellect, wealth, and other talents to influence the world around them in new ways. What we don’t think of are people like us: young girls and women, not only struggling with the daily challenges of a difficult world, but with the added responsibility of being the first standard-bearers of a revolutionary religious and spiritual movement.
Islam came to Makkah, and the world, as a provocative new call to a classic message: the pure worship of the One True God, and an accompanying spread of Divine Justice for all. Perceived to be insurrectionary by the elites of Makkan society, the early Muslims found themselves persecuted mercilessly and tortured without regard for age or gender.

Amongst the first believers in Muhammad (sallAllahu ‘alayhi wa sallam) and his message were various women.

First and foremost were the women of his household: his wife, Khadijah, and his daughters, Zainab, Ruqayyah, Umm Kulthum, and Fatimah. Khadijah was a respected and powerful businesswoman, and in her there is the ultimate example of the career woman: a woman who was not afraid to pursue her interests in business, capitalize upon excellent opportunities, and invest her wealth in a cause she believed in.

Other women amongst the early Muslims included the celebrated martyr Sumayyah bint Khayyat, Asma bint Abi Bakr, and Nusaybah bint Ka’ab. Most of these women were considered to be young; all of these women left their mark in Islamic history. Two of the Prophet’s daughters were married to sons of Abu Lahab and were regularly tormented; Sumayyah was a slave who defied her master’s orders and resisted his agonizing punishment; Asma played a vital role in the Hijrah of RasulAllah (sallAllahu ‘alayhi wa sallam).

These women were the pioneers of Islam – without them, the history of the Muslim Ummah would be drastically different; without them, Muslim men would not have been able to accomplish the feats that they did, and Muslim women would have no examples, no role models to follow. Every Sahabiyyah was different, in terms of both individual personality and the roles that they played in the establishment of Islam and the foundation of the Muslim Ummah.

What these women all had in common, however, was that despite their circumstances – which differed from woman to woman – they all displayed an exemplary courage. To begin with, they live in a patriarchal society which devalued women and often considered them as property; from the outset, their worth as human beings was belittled due to their gender. When Islam entered their hearts, however, none of them allowed themselves to be intimidated into staying silent over their spiritual convictions. Whether they were stay-at-home mothers or business women; slaves or warriors, they each drew upon their inner strength of faith and character to stand up for what they believed in.

Today, many Muslim women feel that their gender, their ages, their financial circumstances, or other factors limit them in how they can practice Islam or play an important role in modern Islamic history. The Sahabiyaat did not allow any external factors to prevent them from being amongst the strongest pioneers of Islam; no Muslim girl or woman today should let herself feel intimidated by the challenges she will face in her pursuit of Allah’s Pleasure.
“When a butterfly flaps its wings in China, a tornado brews in Texas,” the saying goes. Every Muslim woman is a butterfly: a small being on her own, pushed and pulled by different forces, but even the smallest act that we do with firm conviction and a sincere intention to please Allah can have an effect greater than we could ever dream of.

Instead of despairing over our lack of control over the world, let us draw inspiration from the Sahabiyaat, from the youthful pioneers of an ancient path. Resolve to be a butterfly, and flutter your wings as fiercely as you can.

Zainab bint Younus (AnonyMouse) is a young woman who finds constant inspiration in the lives of the Sahabiyaat and other great women in Islamic history. She hopes that every Muslimah is able to identify with the struggles of these inspirational women and follow in their footsteps to become a part of a new generation of powerful Muslim women. She blogs at http://www.thesalafifeminist.blogspot.com