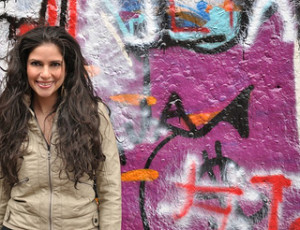 I was born in Chicago in 1979. My parents, both Iranian, told me recently that they came to the US intentionally so that both my sister and I would be American citizens. Yes, I’m an anchor baby…and proud of it. After the Islamic Revolution in Iran (also in 1979), we found ourselves moving around to Greece, France and Iran, but we eventually came back to the US, and I’ve lived here pretty much all my life. I grew up mostly in Dayton, Ohio, among a sizable Iranian-American community and consider myself 100 percent Iranian and 100 percent American.
Today, I live in Raleigh, NC with my husband, Matthew, and our cats, Nazanin and Keshmesh (sweet one and raisin in Farsi, respectively). I write full-time now. I’m also a lawyer, though I stopped practicing once I could make a living writing, which was after I signed the contract for my latest book, Haldol and Hyacinths: A Bipolar Life.

“I’m for truth, no matter who tells it. I’m for justice, no matter who it is for or against. I’m a human being, first and foremost, and as such I’m for whoever and whatever benefits humanity as a whole.” – Malcolm X.
Justice is my thing. If you ask anyone who knows me what pisses me off most in this world, they’ll tell you injustice. I’ve been an activist since I was seven and rallied the neighborhood kids, staging demonstrations to get the ice-cream man to add our neighborhood to his route, which he ultimately did. As an activist and a human being for that matter, this quote represents my guiding principles–whether it’s in my writing or any other outlet.
The Ten:

1. What is your favorite book?
The Autobiography of Malcolm X

2. Who inspires/inspired you?
My family

3. What is the best lesson your mother/mother figure taught you?
Smarts and style are not mutually exclusive.

4. What advice would you give your 13 year old self?
Be nicer.

5. What are your hopes for your daughter(s)?
With all due love and respect, I hope people stop assuming everyone wants kids. I’ve never wanted any, and I never will. In response to the most common comments and questions: I won’t (and you can’t convince me to) change my mind; I don’t detest all children, and I don’t think any of this makes me selfish or callous.

6. What is the biggest trial you went through in your life and how has that changed you?
A psychotic break at the age of 29, second to nearly dying a few times between the ages of 17 and 21. Both experiences brought me closer to God–and in the process, brought me to a place where I was alas able to write full time. Not many people can say that they do what they love for a living, and I thank God for that blessing.

7. Any regrets? What’s something that you wish you’d thought about more before you did it?
Anyone who answers “none” to this question is full of s***. That said, I have to answer none. I believe everything happens for a reason. Still, I’m human, so I of course, I regret a whole bunch of things, but mostly I regret all the times I was mean to anyone who didn’t deserve it.

8. How do you stay grounded in your work and/or spiritually grounded?
I don’t always. But when I do, it’s on account of Love, both divine and human.

9. How do you bring about real change?
The formula that works for me: Take countless heaping teaspoons of persistence and add a dash of delusion. I’m blessed in that rejection only makes me work harder to prove my doubters wrong, and I’m prone to delusions of grandeur thanks to my mental illness.

10. What do you hope to be remembered for?
My ideas and my words.