…I’m making a feature film, a dramatic comedy entitled THE TIGER HUNTER. First, I hope that it will simply be an entertaining and compelling film that will captivate audiences. But also, I want audiences to be exposed to a cast more diverse than they are used to – containing Chicanos, Muslims, South Asians, and more – so perhaps all of us in this greater society can start to understand each other just a little better. 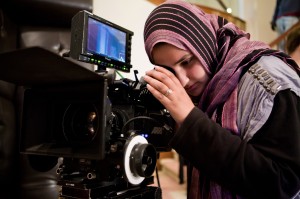 My name is Lena Khan. I was born in Canada, I grew up in California, and now I’m making a movie.

It wasn’t always that way. I finished my bachelor’s degrees at UCLA in political science and history, thinking I’d become a professor and teach people about all those things our society has no clue about.

But, reality changed my mind. I won’t go into the details, but I learned something obvious to anyone who learned about Jewish culture from Seinfeld or stopped wearing conflict diamonds because of watching Blood Diamonds: people learn from films and television.

Having always loved storytelling and making short films, I decided to become a filmmaker, dedicating myself to making entertaining films of social value. I went to UCLA Film School, worked at amazing production companies like Participant Media (Syriana, The Help, The Kite Runner), and directed shorts and music videos for artists like Maher Zain.

Now, I’m making a feature film, a dramatic comedy entitled THE TIGER HUNTER. First, I hope that it will simply be an entertaining and compelling film that will captivate audiences. But also, I want audiences to be exposed to a cast more diverse than they are used to – containing Chicanos, Muslims, South Asians, and more – so perhaps all of us in this greater society can start to understand each other just a little better.

This is going to be fun.

What is your favorite quote?

“Two roads diverged in a wood and I, took the one less traveled by, and that has made all the difference.”
–Robert Frost

This is all about doing what other people aren’t – and when it comes to helping fix the world around you, that’s an incredibly important thing to aspire to.

What Ayat of the Qur’an do you hold close to your heart? Why?
Be not, then, faint of heart, and grieve not: for you are bound to rise high if you are [truly] believers.
Quran, 3:139

What Hadith do you wish more non-Muslims knew about? Why?
What actions are most excellent? To gladden the heart of a human being, to feed the hungry, to help the afflicted, to lighten the sorrow of the sorrowful, and to remove the wrongs of the injured.
-Hadith

As much as some Muslims complicate it, the heart of Islam has simplicity. Simple, good, pure values. It would do us some good if we practiced this, and everyone else also knew it.

1. What is your favorite book?
Maniac Magee, The Godfather, or The Hitchhiker’s Guide to the Galaxy. I assume we are not counting our Holy Book for the purposes of this question…

2. Who inspires/inspired you?
Zaid Shakir. Knowledge, action, sincerity. I think he lives and breathes a dedication to serving God and humanity.

3. What is the best lesson your mother/mother figure taught you?
My mother is the one who taught me to do for society what wasn’t yet being done, and to take the lead in making it happen.

4. What advice would you give your 13 year old self?
Don’t forget things you work so hard to learn, even if it requires a lot of reviewing. And, if you drive your brother’s Chevy Camaro and you get a flat tire, pull over instead of trying to drive even a small distance on his fancy rims.

5. What are your hopes for your daughter(s)?
I hope they go to heaven, and live a life that directs them there. Who cares what happens here?

6. What is the biggest trial you went through in your life and how has that changed you?
I won’t say what the trial was, but it humbled me, and this society really needs a bit more humility.

7. Any regrets? What’s something that you wish you’d thought about more before you did it?
Like most people, I have plenty of regrets! I don’t think I want to tell everyone about them though…

8. How do you stay grounded in your work and/or spiritually grounded?
All I can say is that I try my best. Outside of my work, I try to dedicate a certain amount of time each day to improving myself. I have a journal that I write in each day where I go over how I’m faring in a certain quality in which I’m trying to improve, and how I can continue to progress. I try to make sure to have time for my Arabic studies and Islamic classes each week, and after that just hope Allah keeps me grounded. I don’t know about how spiritually grounded I am, but staying grounded in general is easy: when I count my blessings, I try to look to those below me. When I try to think about myself and how I’m doing, I think about those who are better than me.

9. How do you bring about real change?
I don’t know…but I know that it’s not a quick process. As an example, in trying to use the power of film and tv to influence and chance perceptions, this is something I know will take dozens if not hundreds of movies and shows. You need a long-term vision. These days I think one of the problems in our community in particular is that we only work toward, and can imagine, short-term results.

To help Lena get the final funding for her film, visit:
http://bit.ly/helptigerhunter

To sign up to be informed when/how you can see the film, visit:
http://www.thetigerhunter.com
Direct: http://eepurl.com/tX-zr

Part and Parcel – an article by Lena Khan
http://www.suhaibwebb.com/society/entertainment/part-and-parcel/