I find that writing helps me connect with other amazing Muslim women and women of colour. It also allows me to detangle the contradictions of being an indigenous Muslim woman living in Canada. 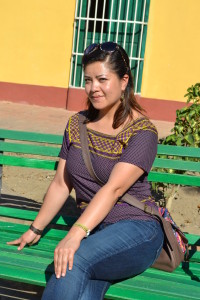 My name is Eren Cervantes-Altamirano. I was born and raised in Mexico City, but I moved to Canada to pursue a university degree. I have lived in Canada for the past 7 years, many of which have given me a lot of perspective about identity. I converted to Islam almost five years ago, which added another layer of complexity to my already difficult identity. Today, I self-identify as indigenous, as Muslim, as a woman from the Third world and as a feminist of colour. These identities do not always agree with each other, but I guess that’s what life is all about… trying to understand what it all means.

I am currently pursuing an MA in Public Administration… I know what you are thinking… This is the kind of degree that crushes your identity in order to make you fit a very narrow box in order to label you a “bureaucrat.” However, after joining the unemployed-club in 2012, I realized that as much as I loved studying gender, religion and politics, I needed a recognized degree with some sort of professional component in order to find a high-er paying job.

Despite the fact that the city where I live and the school I attend have tried to mould me into a “bureaucrat,” I have seen some rays of sunshine through my engagement with feminist, intersectional and decolonial literature. Thus, rather than writing a thesis on how to solve a policy problem, I am working on analyzing the multiple ways in which policy work is highly problematic and undermines the experiences of Indigenous women and other women of colour. My hope is to transition into a PhD and work with grassroots organizations (inshaallah).

In the meantime, when I am not studying, working or baking, I spend most of my time writing either for my personal blog or for Muslimah Media Watch. I find that writing helps me connect with other amazing Muslim women and women of colour. It also allows me to detangle the contradictions of being an indigenous Muslim woman living in Canada.

Give us your favorite quote and tell us why it mean so much to you:

One of those phrases that are lately stuck in my mind is:

“No matter how you feel, get up, dress up, show up and never give up.”

I first saw it in a meme, and it totally resonated with me. This past year has been incredibly difficult for me. I recently loss my partner in a car accident, and despite the pain and the sense of loss, I was always very clear on the fact that I have to go on.

I have always been a very pragmatic person, but I am not big on drastic, sudden changes. On the contrary, I like to feel in control of situations. Thus, losing Saad, my partner, was not only about my pain and sadness, but also about how my world had been shaken without prior notice.

Yet, I learned that I can’t control the world, but I can certainly control what I do and how I react to it. This phrase is my philosophy. No matter what, it is important to keep going.

What Ayah of the Quran do you hold close to your heart? Why?
Quran 2:62
“Those who believe (in the Qur’an), and those who follow the Jewish (scriptures), and the Christians and the Sabians,- any who believe in Allah and the Last Day, and work righteousness, shall have their reward with their Lord; on them shall be no fear, nor shall they grieve.”

This ayah has been very close to my heart since I converted because, for me, it shows that there are many ways to be “righteous,” and righteousness is rewarded with calmness.

What Hadith do you wish more non-Muslims knew about? Why?
I am not big on ahadith. I know people love to quote them all the time, and some Muslims argue that it is not possible to interpret Qur’an without ahadith. Yet, I personally feel that the hadith are often misused and overused to justify all sorts of things. In addition, I feel that most of the ahadith speak to a cultural context to which, as a Latin American convert, I have no reference to.

Further, I feel uneasy with the idea of “legitimate” knowledge and transmission and how these terms have been politically defined. One of the examples that always puzzle me is that of Umm Waraqa and the issue of women leading prayer. Umm Waraqa is said to be one of the only people to have memorized the whole Qur’an at the time of the prophet. Thus, she was appointed by the prophet to lead prayer. The controversy comes because scholars, mostly male, disagree in regards to whether she was appointed to lead mixed- congregations or only women. Whereas some Muslim feminists use Umm Waraqa as a primary example of women’s role in leading mixed-congregational prayers, conservative scholars contend that Umm Waraqa only led women. Interpreted within a context of patriarchal epistemology, we are left with very little discussion about women’s role in theology and liturgy, and with a lot of male scholars who shut down women from participating or even attending mosques.

As a convert, whose cultural background is completely different, I see hadith as a battlefield for epistemic legitimacy. My question is who chooses what constitutes a legitimate position? And who gives those people the power to decide so?

1. What is your favorite book?
I have lots. But some of my favorites include Qur’an and Woman (Amina Wadud), The Veil and the Male Elite (Fatima Mernissi) and Do Muslim Women Need Saving (Lila Abu-Lughod).

2. Who inspires/inspired you?
There are tons of people who have inspired me along the way. I come from a long line of strong women from both my maternal and paternal lines, honouring these women and their stories is my reason for doing everything I do.

3. What is the best lesson your mother/mother figure taught you?
My mother has taught me a bunch of pretty powerful lessons. But I guess what it comes down to is to the fact that identity matters. Your identity is your soul, is your driver, your essence. If you don’t know who you are and why, you are missing a really important part of yourself.

5. What are your hopes for your daughter(s) and/or son(s)?
If I ever have children, I hope they will live in a better world… I hope my daughter won’t be constraint by her sex and gender or her race. I hope she won’t be harassed in the streets for the way she dresses, or that feminists won’t use her as their battlefield. I hope my son will learn early on about the importance of feminisms (and the nuances in between). I also hope patriarchal heteronormativity won’t push him into particular understandings of “masculinity” and that he will always feel good in the company of strong women.

6. What is the biggest trial you went through in your life and how has that changed you?
My partner Saad passed away a year ago. This experience has changed me for ever. As my mother told me after his passing, “You will be scared for life and the pain never goes away.” The hard part is picking up the pieces, and trusting that Allah knows best.

7. Any regrets? What’s something that you wish you’d thought about more before you did it?
Overall I don’t have any major regrets. But I think that a bit of regret is healthy… it triggers that part of your brain that says “don’t do this again… ever…”

8. How do you stay grounded in your work and/or spiritually grounded?
I don’t think I am spiritually grounded. After losing Saad my religious practice is all over the place and I find myself trying to make sense of life with the limited knowledge I have. However, something that keeps me going is social justice causes. For me, Islam is about social justice. One can pray five times a day, but if you are not helping out your neighbour, then what is the point?

9. How do you bring about real change?
It depends what you mean by “real” change. I don’t mobilize masses, I don’t win Nobel prizes, and I don’t deliver big speeches. But I think I get people talking and thinking about certain things (I hope so, at least!). For the past few months I have been working on getting people to discover how similar or dissimilar their experiences are, how they benefit or not from other’s oppressions and how they can make positive change. As such, I like to talk about identity, race, class, religion, etc.

10.What do you hope to be remembered for?
I hope to be remembered in the big book of feminists… hahahah. See, a few years ago I really wanted become the first female mufti of Saudi Arabia. These days, I am more focused on my work with women of colour, but tomorrow who knows. I think I will be content with future generations considering me a part of the long line of strong women in the family.